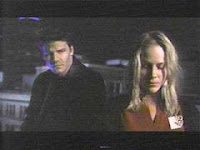 Last night, we concluded the ANGEL section of our class by watching the Season Three episode "Lullaby." Here's a link to the transcript.

We discussed the depths parents are willing to go to for their children, such as Holtz's single-minded willingness to commit evil acts in what he sees as the furtherance of a good goal. He has lost all focus beyond gaining revenge - in this, he has a few echoes with the story of Medea, who was willing to murder her own children to hurt their father, Jason, who had abandoned them. I've included a link to the story. We also saw the transformation of Darla, who sacrifices herself so her child can be born and she can hold onto the idea that she did manage to love something, at least once.
For the next two weeks (our last sessions), we move into the world of FIREFLY. No vampires here, but plenty to discuss regarding families. If you're trying to find a tag for the show, "science fiction" is probably your best bet, as the show involves space travel and is set in the future. But it's unlike any science fiction you've ever seen - there are no aliens, just humans with all of our good and bad traits. It's an ensemble show, so there are nine (count them - NINE) main characters to get acquainted with. I've included a link here that does a nice job of outlining the parameters of the show.

And - just for fun - I've included a link to a quiz so you can determine which character you most closely resemble!

I'll keep you posted on the room situation if I hear anything.
Posted by K. Dale Koontz at 6:59 AM No comments: 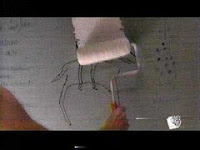 Last night, we left BUFFY behind and began our exploration of ANGEL with the Season Three episode "Fredless." There was much there to talk about, including how parents and children relate, how finding where you belong often involves letting go of where you think you belong, and the importance of a well-accessorized toaster. I've included a link to the transcript of the episode here.

Also - just for fun - included a link to an earlier episode in which Lorne (at Angel's behest) returns to his home dimension and talks with his family. You'll quickly see why our Liberace-ish Host left what was then home for the bright lights of L.A. Look in the background for his brother Numfar - that's Joss Whedon. (The "Dance of Joy" was performed to celebrate Lorne's unexplained disappearance.) You really need sound on your computer to get the full effect.

Next week, we'll be examining fathers and sons. You see, later in Season Three, Angel discovers that, against all odds, he's a father. (Vampires can "sire" other vampires, but they can't have children.) How will this change his life? The lives of those around him, who are suddenly faced with the reality that a tiny little life relies on them totally? Not to mention, how to you baby-proof an arsenal?
Posted by K. Dale Koontz at 7:14 AM No comments:

Sorry - this is a few days later than I had wanted it to be, but I spent the weekend commuting up to Davidson to attend a Shakespeare symposium and that meant a few things here fell by the wayside.

On Valentine's Day, we viewed and discussed the Season Five Buffy episode "Family," which explores the intersection of blood family and chosen family, with some interesting ideas on family beliefs and legends thrown in as well. This week, we move on to Angel and there's been a change of plans. As I was reviewing the episode I'd chosen for this week, it occurred to me that it is part of a multi-episode arc and it was going to be very difficult to set up properly in our limited time frame. So I'm skipping ahead to the Season Three episode "Fredless" instead. If you'll follow this link, you'll go to the Buffyworld site, where you can access the transcript of the episode. In class, I'll catch you up to speed, then we'll watch and discuss the episode in terms of parent/child relationships, leaving home and finding it again.

See you Thursday!
Posted by K. Dale Koontz at 6:34 AM No comments: 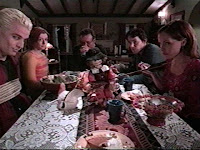 Last night, we began what will be a six-week journey through Joss Whedon's explorations and portrayals of family. As we saw in our first episode, "Pangs," families can be messy, dysfunctional, squabbling mobs - and that just describes the heroes of the piece!

I've added some links here that may be useful to you. First, a summary of the episode. Next, a summary of next week's episode (the lovely Season Five "Family"). I encourage you to check out the Website - you'll find all sorts of information about each episode, including a summary and transcript. I've included a link at the top of the blog over on the right.
Here's a link to the Jess Battis text on chosen families in Whedon's work.
And here's a link to an academic Whedon bibliography. Fair warning: it's long and involved, because so many scholars are interested in Whedon's work. I'll work to put together a shorter one that only focuses on the book-length publications, but this should keep you occupied in the meantime. Feel free to play around - put in a search term like "Pangs" and see who has written what about our first episode, for example.
Next week - we look at "created" family vs. "blood" family. Is one better than the other? Does carrying similar DNA create a relationship that must be honored, regardless of anything else? Or are we free to choose who we call "family"?
Remember that we meet in the Global Studies Room in the Rose Library!
Posted by K. Dale Koontz at 8:27 AM 4 comments: