The conference wraps up today - I'll post final thoughts later. Wilmington has been good to us - and it's been a good conference. One of the delights of a popular culture conference is how interdisciplinary it is. Rather than just going to media studies panels, I have choices from panels discussing Shakespeare, the material culture, technology, and so on. The hard part is choosing!

Of course, another key of conferences is having a chance to get feedback on your own work and see what's going on in the field. My panel (which was yesterday) was a very strong one. We had all worked independently, but had bridges for the other speakers, so it felt very organic and unified. Not all panels have that - especially when the speakers haven't met and are preparing in a vacuum, as it were. And (naturally) many presentations are of works in progress - mine changed a good bit from the proposal to the presentation, due to time. But I had one nugget of information that seems to be my shiny new unique contribution to the readings of Dollhouse and I've been asked to develop that further for publication, which is always a kick. There are some other bits of news, but I need to scurry to catch the final two panels today, so it'll have to wait.

Anyway, a gang of us (what's the collective noun for a group of academics? A dissertation? A theory? Hmm.) gathered after the closing reception and dinner (in the hotel - hardly ever anything to write home about, yet a substantial hit on the credit card. And you wonder why I cook at home most nights) to watch Friday's episode of Dollhouse.

I hate to say it, but it felt phoned in. There were cliches galore and they weren't being used as ironic commentary. (Lightning storm? Spilled milk? Shiny butcher knife? Really, was all of that necessary?) The core concept was interesting - the maternal instinct is just too strong to be "wiped," even if it was implanted in the first place - but it just didn't hang together for me.

I want to like this show; I really do. And there are glimmers, but so far, they seem more like foxfire luring me deeper into the swamp than glittering Truth. I'll stick with it, but I will continue to point out when the emperor appears to be nekkid.
Posted by K. Dale Koontz at 8:17 AM No comments:

The Coast with the Most! 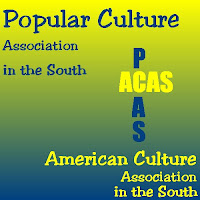 For the next few days, I'll be posting from Wilmington, NC where the annual Popular Culture/American Culture Associations in the South conference is being held. I've attended this conference before and it's always a lot of fun. Academics - full-time eggheads, eager grad students, and dewy-eyed undergrads - we're all here and we're all presenting on the subjects that get us fired up to go in front of yet another classroom of maybe-not-totally enthused students. I have a chance to hear papers on subjects ranging from religion & culture to the Age of Obama to television studies to teaching Shakespeare.

My particular paper is up tomorrow afternoon - it's the one I've been working on tying Whedon's Dollhouse back to its Roman roots in Ovid's Metamorphoses. It's been an interesting vein to mine and I'm hoping for some positive feedback on the angle I'm using. It's not a complete paper - reading time here (as at most conferences) is limited to only 20 minutes, so some very interesting material had to be cut. But I plan to put it back in for publication when I expand the work.

We - I'm traveling with FryDaddy, who you may know from my more general blog - arrived late, late, LATE last night - there's just no short way to get here from home, since we have yet to master wormhole technology. And since this trip is totally out of my pocket (the school has always been very generous in supporting my conference presentations, but the economic meltdown and budget logjam brought that lovely perk to a screeching halt last year), I'm not worrying about attending every single session.

Still, there are some very interesting presentations happening and I'll be telling you about them, as well as some tidbits about presenters, conference life and Wilmington in general.

For now, though, I go in search of fresh coffee. More later!
Posted by K. Dale Koontz at 9:25 AM No comments: