Often, February signals the "bottom of the barrel" in the movie world - too late for worthy-of-Oscar-contention (and no, I'm not writing about the live-television mess that might have been the end of PriceWaterhouseCoopers love affair with those Oscar envelopes), but too early for the biff-bam-pop! (sorry, not you guys!) of blockbuster season.

However, this year has been different. Perhaps the universe is trying to atone for the massive, horrible pop culture losses that 2016 brought - although this year has already seen the sudden and unexpected passing of Bill Paxton, who should always be remembered for this charming oddity. A number of well-received, strongly-crafted films have already come out this year, along with, it must be said, a number of "huh?" ones, but them's the breaks, kid.

This is a pleasant change from A Dog's Purpose, a late January release that I didn't blog about, since it was very much "meh." That film, honestly, is cute and heartstring-tugging, but in a way that feels very carefully orchestrated and - truth be told - a bit manipulative.

I'd seen John Wick: Chapter 2 which, while suffering from "mid-trilogy-itis" was still great fun, with strong action sequences, some amazing shots (the Italy catacombs scene! Yikes - women may be at the periphery of this film, but I can respect the movie for not reducing them to mere body parts), and some dry humor. Oh, Keanu, it's good to see you again.

But nothing prepared me for the sheer brilliance and freshness that is Jordan Peele's Get Out. Prior to this, Peele was best-known as one-half of the sometimes-scathing-comedy duo Key & Peele. For a lesser man, that would have been enough, as K&P was one of the sharpest comedy teams ever. Full stop. (Don't take my word on that. Read this. Or this. Or maybe this!) But no - Peele has much more to say and Get Out is his first stop. 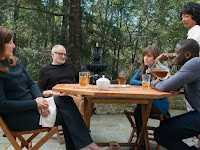 Oh, and what a stop it is. I was reminded (just a little) of Blazing Saddles, the Mel Brooks classic that uses comedy to skewer racism. Peele doesn't go that way - racism is certainly front and center here, but Peele, influenced by classics of the horror-thriller genre such as Stepford Wives, Night of the Living Dead, and Rosemary's Baby (by way of Guess Who's Coming to Dinner), leaves behind comedy to come at this topic straight on and the results are electric.

No, this isn't a run-of-the-mill horror movie - and thank goodness! No possessed dolls, no creepy children, no monsters slashing just to show the filmmaker's creativity in disassembling the human body. Instead, we get -- but no. I can't tell you that part. This is a film you really need to go see. On the big screen, with as many friends as you can round up. For THIS is the type of film we need to be supporting - in the best tradition of horror movies, it's both original and thought-provoking. It's not a drab rehash of cliches; instead, Get Out acknowledges those tropes and then proceeds to turns them inside out. Think about this when you go see the film -

And then be very, very glad that Peele has at least four more "social thriller" movies up his sleeve.

For more about Get Out, be sure to tune into C19TV's Meet Me at the Movies - available as a streaming show!
Posted by Dale Guffey at 8:23 PM No comments: