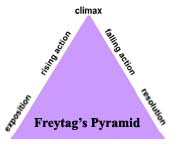 Welcome! This blog is designed to accompany a non-credit course I'm teaching. The course runs for six weeks and focuses on some of the narrative techniques used by Joss Whedon over the seven-year run of his popular television show Buffy the Vampire Slayer.

OK, you say. What's that mean?
Excellent question - move to the front of the class.
"Narrative technique" can be thought of as a dressed-up way of saying "storytelling." Now, most of us are used to very simple, straightforward stories. Let's use the fairy tale of Rumplestiltskin to illustrate this structure, which can be thought of as a triangle. To be fancy, you can call this "Freytag's Pyramid," which is at the start of this post.
We start at the left-hand side of the triangle at the base with the exposition; in this case, "Once upon a time." At this stage, we are introduced to characters, situations, and relationships. Here's the miller's daughter, whose father lies and brags that she can spin straw into gold. The greedy king hears about this fantastic talent and begins to wonder how he can exploit it.
Now that we have those basics established, we begin to climb the left leg of the triangle. We learn what the central conflict of the story is and the action begins to rise. The king has the girl brought to his castle and she is ordered to spin a room full of straw into gold by morning - or else! A mysterious little man appears and offers to help, in return for the girl's necklace. The greedy king then demands more and more of the girl until she is forced to agree to give the strange little man her as-yet-unborn child. Delighted with the girl's abilities, the king marries her (a girl who can produce gold from straw is an asset to any king's court) and they have a child. Then the mysterious little man arrives to claim the child as his own. See how the stakes keep getting higher?
The tension culminates in the climax - in this case, the girl has to guess the little man's name in order to keep her beloved child. She tries every name she can think of and (with help) finally is able to hit on the proper name. The enraged little man splits himself in two with anger.
Then we slide down the opposite leg of the triangle through falling action until we reach the resolution of "and they lived happily ever after."
But not all stories are told this way. Whedon used a variety of techniques and structures to tell his stories and we will explore six of these over the course of this class. And a few things in this tale will be re-visited as well.
Posted by K. Dale Koontz at 11:16 AM 5 comments: