The Dollhouse is back. That creepy, hi-tech, Zen-like spa environment that exists to provide the super-rich with whatever their fantasy might be (Tempura Joe? That pushes the envelope on ewww!) returned last night on Fox.

We're entering a very important few weeks in Whedon-land. Ratings were less than stellar last year and the show had an uneven beginning that never really managed to widen the circle of viewership beyond the Already Converted. So here's the test - can Whedon make Dollhouse sing to those who aren't already in the choir loft? Well - let's see how we started.

Last night's episode was titled "Vows." The title referred to a number of vows taken by characters - we see Echo getting married as part of a convoluted engagement (Ha! "Engagement" has a whole new meaning here that I didn't see until I started writing that sentence!), Paul is cruel to be kind in keeping his vow to protect Echo, and so on. The episode (which you can view for free here) was sharply written ("What if she goes over your head?" "I'm very tall."), fast-paced and overall continued the upward trajectory of the end of last season.

By the way, the Whiskey/Topher dynamic was easily the most interesting aspect of the show last night and I want to see more there! One of Whedon's strengths is his ability to craft strong ensembles and this is the time to let his stars shine. Dollhouse has tremendous potential to ask hard questions about identity, freedom, and our ability to compromise our principles while telling ourselves that we haven't and I want to see him explore all of that.

So I really don't want it to turn into "Who's Echo this week?"

And welcome to the world, Charlotte Grace Prinze!
Posted by K. Dale Koontz at 8:51 AM No comments: 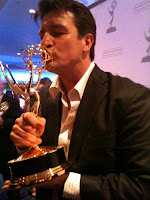 For those of you who are fans of Dr. Horrible's Sing-Along Blog (and really, who isn't?), there is great joy in seeing the good Doctor and crew win the Emmy award for "Outstanding Special Class: Short-Form Live Action Entertainment Program." (Wow - even the title's quite a mouthful!) This being Whedon, there's irony in the win - Dr. Horrible won a television award despite the fact that it's never been shown on television; it was an Internet-driven sensation. Well, you take the win however you can get it, I suppose. And it's good to be able to post a picture like the one on the right. Not only because I'm a Nathan fan, but - let's face it - Captain Hammer would so totally smooch his Superhero of the Year Award, probably between choruses of a power ballad.

So there's that news. Aside from that, I'm trying to both gear up for the Sept. 25 Season 2 premier of Dollhouse and finish preparing my "classical Echo compared with Whedon's Echo" paper for its early October outing in Wilmington, NC. That's the location of the Popular & American Culture Associations in the South conference this year. It's always a fun time and I'm very much looking forward to going. Here's the conference link, if you're interested in the sorts of things you can see at such a thing. From that link, there's a link to the "almost final" conference schedule.