Of Greeks and Space - A (Partial) Third Age Post 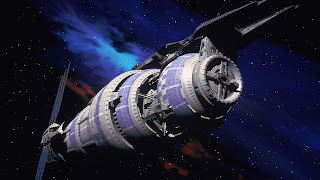 Quick update on Dreams Given Form - we turned in the draft for Season 3, so we're now deep in Season 4. Ah, Season 4! Cartagia, Lorien, war, betrayal, tenderness, and hope. Ensley and I have said for years (long before we started this project with ECW Press) that JMS follows Freytag's Pyramid throughout B5, with each season roughly correlating to one element of the pyramid (which is really a triangle, but whatever. 19th century Germany). That puts Season 4 in the role of "falling action" following the climatic Season 3. In no way does that mean that Season 4 is a snoozer - quite the opposite. As the result of decisions made in the climax (Z'ha'dum, anyone?) events - quite LARGE events - happen. I love Season 4 for a fierce passion and I'm looking forward to this part of the project.

In movie news, last weekend I took my parents to see My Big Fat Greek Wedding 2. Let me set the stage here a bit. Mom and Dad don't go to movies - it can be a hassle for them, their hearing isn't what once it was, and many movies just aren't made with them in mind. So when I mentioned this one and they both agreed to go - great jumping frog of Calaveras County! Off we went and I asked the manager what sort of captioning devices they have available for the hearing impaired. (Side note - always ask about this if you or someone you are with could benefit from such a thing. Movie theaters are places of public accommodation under the Americans with Disabilities Act and they should have something to help their patrons. This manager, in fact, was delighted that someone had asked! Theaters have to spend money to make these things available, but many folks don't even know about them.) Dad got rigged up with this nifty doo-hickey that fit in the cupholder and had a little rectangular screen on a flexible arm that he could adjust to suit his eye level. The screen projected the closed captions for the film and he could easily see the image on the big screen.

As to the movie itself - you know, I can't be fair about this one. I adored the first one (2002, directed by Joel Zwick) and they may well have taken too long to get the second one together. But they re-assembled the key cast (a near miracle, considering how large an ensemble piece it is) and, while some of the jokes may seem a bit forced, I loved seeing this movie with my parents. I loved seeing them see the movie. I loved being able to go out with them to a movie. So yeah - I'm biased on this one.

It's a sweet movie - very Capra-esque in its optimism and zaniness (think about the whimsical family in You Can't Take It with You). Unfortunately, we live in a highly cynical age where that sort of thing is routinely dismissed as corny fluff. Get over it. Let yourself go and have an hour and a half of fun and unplug the sardonic circuits for a bit.

And take someone who doesn't get out to the movies much. You won't regret it!

Yes, Windex got in on the action! If you've seen the first movie, don't worry - your favorite VERY multi-purpose cleaner is back!

Posted by Dale Guffey at 8:00 AM No comments:

The Return of Third Age Posts!

Well - THAT break was longer than I ever wanted it to be! "Third Age Thursday" was supposed to be a weekly post about Babylon 5, and particularly about the progress being made on Dreams Given Form, the companion guide to the show I'm co-authoring with Ensley F. Guffey. We tag-teamed on Wanna Cook?, a similar guide to Breaking Bad which was released in 2014 (available at fine booksellers everywhere!) and enjoyed the experience enough to look around for another project that would let us work together and settled on this one. And all was wonderful.

I won't say the Shadows ambushed us, but I had a health scare that put the entire project back a year while I recovered and poor Ensley did his best to soldier on until I could take up my share of the load. But we're both back and in fine fighting form!

In fact, we just turned in the draft manuscript for Season 3. (Wow - I just love that season!) Seasons 1 and 2 have already had their first turn through the Great Machine of Editing, so we're back on schedule. Well, we're back on our new schedule, at any rate. ECW Press (our publisher) has been exceptionally kind to us and we're looking forward to moving forward with this sizable project.

Keep in mind Dreams Given Form isn't limited to the five seasons of Babylon 5. No, sirree! We're covering that, sure, but we're also providing material on the official novels, movies, comics, and other canonical sources. It's a big project and one of our biggest challenges is figuring out how to do the universe of Babylon 5 justice without the book becoming a multi-volume set.

At any rate, today is a rare day off from watching, annotating, drafting, and screaming (that often accompanies the drafting stage for me) but I'm back at it tomorrow and I realized that I hadn't posted about the project in far - FAR - too long.

I Saw the Light

The story of Hank Williams Sr. is interesting - he's widely considered one of the most influential American singer-songwriters of the 20th century despite his near-inability to either read or notate music. He had 35 Top 10 singles, and 11 of those reached the Number One position. All this happened in a remarkably short time, as Williams died at the far-too-young age of 29. He had great troubles in his personal life, beset by alcoholism (Roy Acuff once warned Williams of the dangers of his drinking, telling him that he had "a million-dollar talent, boy, but a ten-cent brain"), drug abuse (he self-medicated to deal with the severe, chronic back pain caused by his spina bifida), womanizing, and a host of other issues. His son would grow up to become Hank Williams, Jr. (better known as "Bocephus") and the third of that line is making quite a name for himself as well. Then there's Jett Williams, who was shuffled around like a marked card. Really, add mournful Spanish moss to this family and you've got a textbook definition of Southern Gothic.

All of this should make for a great, compelling movie. Yet it doesn't.

I Saw the Light boasts an amazing performance from Tom Hiddleston, who does his own, quite credible, singing, yet the film itself never manages to soar. Instead, it bumps along in a series of vignettes about increasingly-unlikable people. Audrey, his first wife, is played by Elizabeth Olsen as a spotlight-seeking shrew. Lillie, his mother, is played by the enormously-talented actress Cherry Jones, who never gets to to much beyond be overly protective of her boy.

The film focuses on the last six years of Williams' life, a time in which Williams was prolific, yet spinning madly out of control. His dream is to appear on the Grand Ole Opry ("the show that made country music famous"), yet he lacks the discipline to stay there, preferring to tomcat around and drink until the editing of this film could possibly make sense. I know that's harsh, but the structure of this film keeps any sort of tension or interest from building - scenes start and end without any rhyme or reason and new scenes begin without context. It's as if you're experiencing an alcoholic blackout - things happen and then something else happens, and you're pretty sure something happened in the middle, but damned if you can figure out what it was and no one's telling you.

Hiddleston is truly amazing, but he just can't save this. Rent it if you want to, but there's no shame in passing this one by.

In the meantime, listen to Hank. He's worth it.