Robots and Things That Want to Kill You 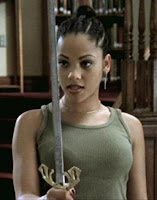 Reel One: The Great Buffy Re-Watch continues! Originating in Canada, but with a crack team of critics, viewers, bloggers, and just all-around swell people from around the globe, this week's effort focuses on the two parter "What's My Line?" and the creepy stand-alone "Ted." In short, Buffy learns that her drowning at the hands of the Master caused another Slayer to be activated - one with a far greater dedication to the job (as well as a truly all-over-the-place accent. Oh, Kendra. How I miss you). "WML?" is set during one of those odd "Career Days" at Sunnydale High and Buffy and the Scoobies confront the eventual need for gainful employment. (It'll be interesting to see how some of this plays out throughout the series.) In "Ted," Buffy's divorced mom tries dating. She picks John Ritter and well, let's just say it goes somewhat less than well. Miniature golf can't solve all relationship problems and robots can go mad.
Reel Two: The film class met Buffy's action hero godmother, Ellen Ripley. (#8 on the AFI list and the only female in the top ten!) I was pleased at how well Alien holds up over the years. Still psychologically creepy (and a few moments that are, for me at least, truly jump-worthy), still gets you thinking about money as motivator, and still proves that while robots may obey Asimov's Laws of Robotics, they need to be programmed in. (Who knew? I thought the link was going to be Buffy/Ripley this week - turns out I'm going with the robot angle!) The post-film discussion went so well that several members of the class didn't want to leave - a problem I love to have! The first compare/contrast essay was due, so I have reading galore to go through. (Is it geeky that I'm excited about that? No - don't tell me.)
Next week, the class examines the paranoia that comes with not being able to tell the aliens from the humans and the amazingness that is "Surprise/Innocence." In both the film class and the Re-Watch, our Stalwart Protagonists are going to be changed forever.
Posted by K. Dale Koontz at 6:49 AM No comments:

They're Already Here! You're Next!

Reel One: This week, the class examined that classic of Cold War fears, Don Siegel's Invasion of the Body Snatchers. Mayberry (sorry - Santa Mira, California) gets taken over by "pod people" (no, not the Spinal Tap variety, nor the Lady Gaga genus) who have a drive to survive, but make do without any sort of messy emotion or personal connection. "Santa Mira" - I just love that name for a town in which everything is a mirror image and nothing is what it appears to be. Invasion is a film that holds up well (although at least one student was verbal in his desire to leave all this black & white stuff behind), especially in its strumming the lyre of "if the enemy looks like us, who can you trust?" Even sleep becomes an instrument of destruction in this film! Sure, a few things are definitely dated - "been to Reno" as code for "gotten divorced" and doctors who cheerfully interrupt their hot date to make a house call - but Invasion still plays a sonata of science fiction mixed with a good dose of psychological horror.
Reel Two: Over at the Great Buffy Re-Watch, similar themes are being explored. This week's showing features "Lie to Me" and "The Dark Age" in which viewers learn that Giles - steadfast, tweedy Giles - has a past he's not proud of and it's come to town. The enemy can look just like us and the people you expect to have the answers are, in fact, the source of the problem. But as the Zen Buddhists might remind us (if they had a hankering to fight the Undead), within every problem nestles its solution and the day will be saved, but the status quo will not be fully restored. Something has to be sacrificed in growing up and this week, that something is (for Buffy) a certain measure of childish innocence and (for Giles) thinking that a tweed coat can successfully disguise a dark past forever.
Next week - heroines discover that Real Life might not match the brochure. Buffy deals with the results of an vocational aptitude test (turns out "Slayer" isn't listed) and my class meets her fantastic Action Girl aunt, Ellen Ripley.
Posted by K. Dale Koontz at 6:56 AM No comments: 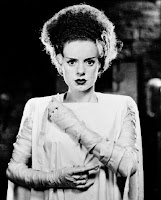 Reel One: The class discovers James Whale's classic (and one of the rare sequels that knocks the original out of the water) Bride of Frankenstein. Humor, pathos, villainy, the "Other" as more human than the humans, even a pitchfork-wielding mob - is there anything this movie doesn't have? We had a good discussion following the screening (helped, no doubt, by the fact that Bride is only 75 minutes long) and we marveled at the fact that this is one of the strange movies in which the title character isn't on screen all that much (under 10 minutes, actually). Bride may be about her, but it's not really her story. To round out the experience, we watched a brief clip (with the Gene Hackman hermit - check it out here) of the parody Young Frankenstein.
All in all, a good night. The class is beginning to click and is watching with more critical eyes than they may have had at the start of everything. Case in point - a very nice discussion about the prevalence of triangles in the film - both the physical shape (Gothic! Everything points up!) and character grouping, which is constantly shifting as the film's tension ratchets upward (see? More with the pointing).
Reel Two: Some Canadian continues to rally her friends to re-watch Buffy and write about the episodes. This week, things are getting good with the inclusion of "Halloween" as we learn that Giles isn't all tweed-and-tea and Buffy's fervent wish to "just be a normal girl" is granted (sort of) with results that edge towards the disastrous.
Next week - in class, we look at how film reflects fears by viewing Invasion of the Body Snatchers and Buffy's life gets more complicated by discovering that adults don't have all the answers and, in fact, raise plenty of the questions. And also raise demons.
Posted by K. Dale Koontz at 7:29 AM No comments:

Flying Cars and a Double Dose of the Slayer 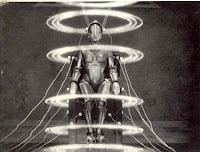 My film class started the actual "watching of the flickering pictures" this week. I chose Metropolis as the starting point for the class, which focuses on science fiction. I'm waiting to hear from the students - was silent film too much of a change for them? Did the "Delsarte Technique" acting style put them off? What did they think of the effects? Of the storyline? These are all questions I hope to have answered in a few days.
As for me, I was stunned by how the film holds up. So very many science fiction concepts can trace their first cinematic appearance to Metropolis - the dystopian city divided sharply into have/have not (one student commented, "So where's the middle?" Exactly), the "machine-man" (the term "Robot" had been coined a few years earlier in R.U.R. by Czech playwright Karel Capek, but it hadn't become widespread), an odd little house that's bigger inside and outside, even flying cars (and they were cars! OK, they look a lot like ultralights, but the idea is there). Women don't come off too well in the film - saint or whore; really no middle ground there - but you can't have everything in late 1920s Germany.
Over at the Great Buffy Re-Watch, I missed posting the second half of last week, which centers on the Season 1 finale "Prophecy Girl," an episode I simply adore. So I have two links there this week - end of Season 1 here, and beginning of Season 2 (Spike! Spike!) here.
And over in my class, we continue exploring created humans and mad scientists next week with Bride of Frankenstein. Neither corpses nor popcorn will be provided. And no, you may not bring your own.
Posted by K. Dale Koontz at 7:08 AM No comments: