Of Popcorn and Paragraphs 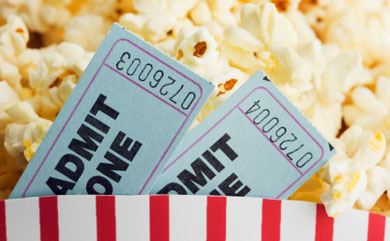 Right now, I'm a little over halfway through my super-fast summer film class. Personally, I would prefer a slower-paced class spread out over the 10-week summer session that met in person and used a textbook, but we work with what we have.

I am often asked, "Film class? You mean, like movies? And you can get (pause to sneer) college credit for that?" The snark is thick.

Sigh. It's hard to be civil sometimes.

Yes, college credit. Yes, you watch movies. And you also write about them, Jack! By that, I don't mean the fanboy screeds that occasionally drive actors off Twitter, nor am I satisfied with plot summaries from imdb.com. I expect - even in this turbo-paced class - students to pick up a few basics of actual criticism. In fact, it's closer to the truth to think of my Intro to Film class as a literature class, only using celluloid instead of paper. (OK, OK, everything's actually digitized these days, The point remains.)

Students learn how to write an actual compare/contrast essay - which is harder than many students think it is. All too often, on the first assignment (which isn't worth that many points for this very reason) students basically structure their essay as "This happened in Film A. This happened in Film B" and then end it, sincerely thinking that they've created a compare/contrast.

It both is and isn't their fault. Writing is hard to teach and harder still to grade and nigh impossible to grade fast, so it isn't a skill covered on most standardized tests and in this world of high-stakes testing that has about one-third of high schoolers on some form of anxiety, mood stabilizing, and/or depression medication, if it ain't tested, we don't have time to teach it. Let the colleges worry about that!

I don't blame the high schools, either. Everyone is trying to do the best they can, but the inmates are running the educational asylums right now.

At any rate, I deal with a LOT of students who are quite bright, but don't trust their own thoughts and ideas. They've been taught for years how to take a standardized test, but essay writing befuddles them and asking them to stake out their own opinions and support them is practically a foreign language (something else we wait years too long to begin teaching, but I digress). Movies are a less intimidating "in" to formalized writing for many of these students and most of them pick up the knack very quickly once they begin to trust that their ideas aren't going to be shot down as "wrong."

They also are exposed to different genres of film that they may not have ever experienced. They learn about the Bechdel Test, they have a chance to prove to me that they can pass the Turing Test (see, these are the kinds of "tests" I prefer to standard "bubble sheet" thingamabobs), and they learn to search for criticism as opposed to quick reviews.

Yes, I think it's a valid class. You ought to take it one day.
Posted by Dale Guffey at 1:54 PM No comments:

Good to Be Back!


Following the publication of Dreams Given Form in the fall, I just had to back off of this blog for a while. It was an amazing year at my day job, as I worked on a major restructuring of my Public Speaking class - with help from generous colleagues, I took the leap and went from "flipping" the classroom to "gaming" the classroom. I've had to make adjustments on the fly, of course (any revamp requires flexibility to find the proper balance), but the initial results are heartening. I was goaded into agreeing to participate in a sprint triathlon at the beginning of June (so I've got about two weeks of training time left) and that's taken a considerable amount of time and energy.

I won't even try to catch up on movies and TV that I've immersed myself in over the last eight months. But I will say that The Marvelous Mrs. Maisel is well worth your time, I found myself wondering if The Good Place will become a supplement to philosophy and ethics classes, Black Panther justly took the world by storm, and I haven't been able to bring myself to watch the current season of The Americans yet. (Honestly, that show is beginning to seem prescient.)

Also on my list - Legion and The Handmaid's Tale.

I'm also preparing for the upcoming Whedon conference - this is the 8th Slayage and pulls attendees from across the country as well as from Europe and beyond. The last one was held in 2016 in London, and I missed it (due to the aforementioned Dreams Given Form). This one is at the University of North Alabama in Florence, AL. I'm excited to attend. My presentation is more of a roundtable this time with several other scholars with diverse points of view. We'll be arguing over the revelation that Whedon gaslit us and the impact it has when a creator turns out to have feet of clay, if not outright mud. (Then again, after some of the thoroughly icky revelations of the #MeToo movement, Whedon seems like a garden-variety jerk, rather than a predatory monster.) Plenty of creators aren't particularly enlightened human beings - how does it affect the relationship with the art? It's going to be an interesting session.

But I've been missing this blog. So I'm back! My summer film class begins on Monday and I'm sure I'll include some material here about their films, along with other bits that catch my fancy.

And - if you've never seen Babylon 5, it's coming to Amazon Prime in June. Buy a copy of Dreams Given Form to pair with your watch (or rewatch - seriously, B5 is crazy-relevant these days!) and see what the fuss is about!