Since last we spoke, I've seen a number of films that have been all over the map. Let me just give you some capsule reviews to serve as catch-up. 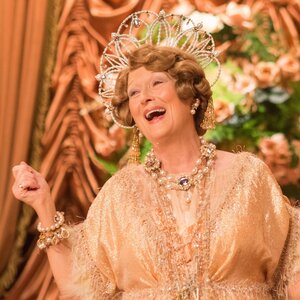 First, on our way out West for vacation (dry heat is hot, yes, but it's not 90% humidity like it is at home!), I watched Florence Foster Jenkins and was surprised by how charming I found it to be. It could have been a simple one-trick pony - after all, the basic plotline is rich woman loves music, wants to sing, is just awful, but those around her shield her from this knowledge.

As Florence, Meryl Streep is wonderful. Her performance is not an over-the-top caricature, which would have been easy to do. Instead, Streep pulls in and lets us see this ageing socialite as a real person with real concerns. Jenkins' singing may have been treated as a joke, but her much-younger husband (played by Hugh Grant with rare restraint) has deep affection for her that transcends money (although they have an "arrangement," the need for which is described in heartbreaking detail) and her pianist (Big Bang Theory's Simon Helberg) comes to value the underlying warmth that emanates from this woman. While not a movie for the ages, it's a solid film and one with a simple underpinning of compassion and heart - you could do far worse.

Case in point - Spider-Man: Homecoming. I've had trouble putting my finger on it, but this movie left me just unsatisfied. It's far from bad, Tom Holland is solid, and there are some nice twists and turns in here (especially regarding Peter Parker's schoolmates), yet it never quite added up to WOW! for me. Yeah, yeah - Tony Stark. Yeah, yeah - a non-cadaverous Aunt May. Yeah, yeah - Michael Keaton as a much more interesting birdman than I thought he was in that other movie. It just never was quite enough for me. Still - I prefer Holland to Andrew Garfield's turn as the Web-Slinger. (Then again, after his turn in Hacksaw Ridge, all is forgiven, Andy!) I say it's a rental, but others may well disagree, and that's okay.

Then - zoinks! as Shaggy might say. FryDaddy and I had a rare opportunity to see Butch Cassidy and the Sundance Kid shown outside on a clear Utah night as part of the Sundance Institute's summer programming series. Think picnic on the grounds and you're there. I'd never seen Butch on the big screen and I was entranced enough to ignore my (very) cold feet. Butch is just a fantastic film and the obvious chemistry between Paul Newman and Robert Redford is glorious to watch. Also, we both won small prizes for our knowledge of Butch trivia, and yay! for prizes. Seriously, scout around your own area - outside summer movies are quite a thing and they are worth seeking out!

Last one - on the flight home, I finally watched Arrival, which turns out to be one of the most thought-provoking science fiction films I've seen in the last few years. How do we manage first contact with an alien species when neither side knows the language of the other? There's some GREAT stuff in here about the tricks and traps that are built into language and the high degree of skill required to truly understand a language, as opposed to just understanding the surface of it, like "milk," "ball," or "war." It's a film that isn't afraid to take its time to build, which I loved. Others may find it too slow, but I say that if you like your science fiction to make you think, Arrival is for you.

Then, just yesterday, I saw War for the Planet of the Apes, which seems to close the gap between the new movies (which began with Rise in 2011 and continued with Dawn in 2014) and the original franchise. I think there could be one more film to actually close that gap and shift the audience's sympathies back to the humans from the apes, but it ends at a darned good place. Woody Harrelson has been watching Apocalypse Now and would someone just please give Andy Serkis all the awards right now? Again, thought-provoking science fiction and it plugs a major hole in the storyline - namely, why can't the humans in the 1968 version speak? Yes, the effects are incredible, but without Serkis to sell it - I just don't think it would matter.

Whew! That's enough! Several movies are still to be released this summer that I'm VERY excited about - check back to see if Valerian by the eccentric genius Luc Besson is worth your popcorn money and, on another front, let's see about Dunkirk!
Posted by Dale Guffey at 4:21 PM No comments: