The 2017 summer blockbuster season is officially underway. While this can be cause for rejoicing (I truly enjoyed Guardians 2 and pleasepleaseplease let Wonder Woman be a strong picture!), it can also be a time for scratching your head and saying, "How'd that get greenlit again?"

The sheer expense of making a big summer movie accounts for Hollywood's rampant timidity - why try something new when you've got a built-in audience for a new installment of an established franchise? (Sigh. Yes, Michael Bay, I'm looking at you.) As the global market has become more important to box office receipts - especially China, which limits how many films it will import and wants them all in 3D - Hollywood has increasingly wooed those markets. In the case of Pirates of the Carribean: Dead Men Tell No Tales (let's just call it Pirates), the Mouse took it a step further, premiering the film at the Shanghai Disney resort. Not that I minded that; premiere wherever you want. But it shows that even the Mouse is not immune to that sweet, sweet foreign movie money.

If you like the Pirates movies, you'll like this one. If, like me, you're a little meh on the whole thing, you'll find a great deal to criticize in this one. For me, it was especially annoying that so much of the film's event took place at night. You see, night on the ocean is dark. Darkdarkdark. And the results are murky and difficult to figure out. Add to that the dimming that often comes with 3D and the result is muddy.

As to the plot, it makes little to no sense, but no matter. There are sight gags a-plenty. You get Johnny Depp staggering and mumbling and trying to find something new in a character he first played 14 years ago. You get Orlando Bloom and a wordless Keira Knightley for the original fans, and you get Pirates: The Next Generation with Brenton Thwaites playing the grown son of Bloom's Will Turner and relative newcomer Kaya Scodelerio as a spunky girl astronomer with a mysterious past. There's redemption by the boatload and an after-credits scene that strongly hints that Disney believe the tides have not yet turned on this lucrative franchise.

Now, I don't think many of us were clamoring for a Baywatch revival, but we've got one, anyway. While this is being savaged by critics (and make no mistake, it IS bad), I think people are being overly harsh. Baywatch knows it's a parody of a television show that was already a punch line, and there's a certain charm in setting the bar so low. I went into this one just hoping to not claw my eyes out and I actually found myself sincerely laughing a few times. The film doesn't take itself seriously, the plot is tissue-thin, and completely implausible. Well, Animal House wasn't a documentary and it still makes me howl. The "R" rating is for language (honestly, I think the "F bomb" is used as a noun, a verb, an adjective, an adverb, and possibly a gerund throughout the film) rather than for nudity and the nudity you have is exclusively male. (I know, right?) Yep, even in the shower room. And the morgue, but let's not go there.

It's a big, dumb, stupid summer movie, but it's almost saved by Dwayne Johnson, who has saved many a lousy movie. And yes, David Hasselhoff (who also has a cameo in Guardians 2 - and is on the soundtrack!) as well as Pamela Anderson appear. Just like Keira Knightley in Pirates, Anderson's cameo is wordless. I'm beginning to sense a disturbing trend with that.

Now go pick up your copy of Beyond Casablanca or its sequel and open to a random page. Go see that instead of either of these.

Change Is in the Air!

I was eagerly awaiting Guardians of the Galaxy, Vol. 2 and was not disappointed. While I understand that some people would prefer more frantic antics, I truly enjoyed the focus on the various formations of what constitutes a "family." I think the film does a great job going a bit beyond the usual WhamBangWow! of a Marvel superhero movie while not succumbing to the dark gritty brooding that is all too often the efforts from the DC offices.

And yes, Baby Groot is adorable, but Drax probably steals the show. Then again - Kurt Russell in full Farrah Fawcett hair, quoting Looking Glass's "Brandy (You're a Fine Girl)" is hard to beat.

It's a fun, fun popcorn flick that had me tear up there at the end - Michael Rooker, man. Ignore him at your peril - and be sure to stay ALL THE WAY THROUGH the credits!

So there are some changes in the air. For five years now, I've served as a co-host of C19TV's Meet Me at the Movies and it's been quite a wild ride. We've done well over 200 shows and it's time for me to step away, at least for a bit. I'm not sure when my last show will be - I've agreed to stay on until a suitable replacement is found and I'll miss doing the show. It's fun to share my opinions with the wider world and I'm still startled when someone comes up to me on the street to talk movies with me from seeing the show. But it's just time. Watching two movies critically a week on top of my responsibilities at work and my involvement in the community takes a good chunk of time to produce quality work and honestly, I just want to grow tomatoes this summer.

Also, Ensley and I will be gearing up toward the end of the summer for the (hopefully triumphant) release of A Dream Given Form, which we're incredibly proud of. Drop us a line - our publisher is working with us on book signings and convention appearances and we'd love to see you! 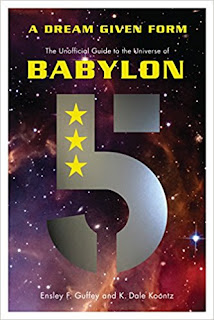 Posted by Dale Guffey at 1:30 PM No comments: