Skyler is Walter White's wife (hey, try saying that three times fast!).  She's the one who found the house they live in and she's worked hard over the years to make it into a cozy home for the family.  She understands numbers and has worked as a bookkeeper.  She loves her husband and her family.  She is also the perfect match for Walt in terms of manipulation and a sense of knowing more than she actually does.

In the beginning, it's easy to see Sky as an innocent.  She's at home getting ready for this unexpected baby to arrive and has gone so far as to sell various household knick-knacks to make ends meet for her family.  She's a little frustrated that Walt hasn't finished the nursery the way he promised to do.  Then she's hit with the whammy of her husband having advanced lung cancer that they can't afford to aggressively treat.  He goes off the deep end, disappearing for hours (and then days) at a time, and shutting her out of whatever's going on.  She's practical about expenses so when her sister's baby shower gift turns out to be a jeweled tiara, Sky's determined to return it to the store.  However, when she does, she is promptly threatened with arrest.  (Seems Marie has a problem that way.)

Here's where things get interesting.

Sky blusters and whimpers in turn until she cries her way out of a tight spot.  She will do this again when she needs a locksmith to let her in to Walt's condo without proof that she lives there (in fact, she doesn't).  She hounds Walt to tell her what's going on.  Okay, that's understandable to a point, but when Walt won't move out of the family house after she discovers his master plan of meth-making, she starts an affair with Ted to force the issue.  She's sneaky and sly and - just like Walt - says she's doing it all for the family.  While she doesn't go as far as Walt - you ARE watching Season 4 by now, aren't you? - Sky's no choirgirl.  In trying to protect her from the gritty details of just how degraded the drug world is, Walt has inadvertently left Sky exposed.  At the end of Season 4, Sky doesn't know everything (if she did, I have to think she'd pack up the kids and run like hell), but she knows enough to know that the water in which Walt is moving is both deep and swift.  She also knows that she's tethered herself to him.  If he goes down, she's very likely to go with him.

And then who's left to take care of the family?

Season 4 of Breaking Bad is now available on DVD and if you aren't watching (or re-watching!) it in anticipation of Season 5, maybe this teaser poster from AMC will convince you.  With the events of Season 4 behind him, is Walt truly the king?  I think the Sun King of France went for grander surroundings than some grimy warehouse and a tattered lawn chair for a throne, but maybe that's just me. 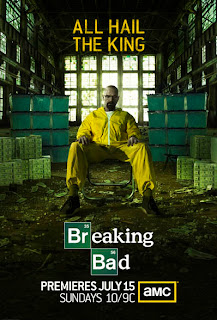 One last thing - beginning on June 11, AMC is running multiple episodes late night Sundays to get everyone up to speed before Season 5 begins broadcasting on July 15.  Set your DVR!

There is one critical difference (in my opinion) between Walter and Skyler.
As you have mentioned previously on the blog while Walter says he's doing it for the family, he really isn't. Skyler on the other hand, really is. While it may be debatable whether or not her course of action is indeed optimal, I do tend to think that she is at least much more honest with herself in terms of her motives.