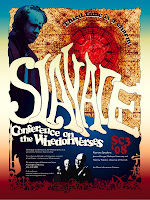 The conference has wound down - which is always an occasion for melancholy. Conferences like this (not all of them, I can assure you) result in some very strong bonds between attendees that last far beyond the span of the conference itself. I will not attempt to recap every session I attended - it would make for a very long post, although if you're interested in particular papers and responses, I'd be happy to assist. Keep in mind that I was only able to attend a fraction of the sessions, since three or four sessions ran simultaneously.

However, mention has to be made of Janine Basinger's keynote address yesterday morning. Prof. Basinger teaches film at Wesleyan University in Connecticut and has been both a mentor and friend to Joss Whedon for 20+ years. She shared a number of insights and stories with a rapt audience and I'll admit to being a touch star-struck. She's sharp as a blade, yet quite approachable. You get the distinct feeling she not only does not suffer fools gladly, but is quite willing to have them eviscerated. And one of Whedon's great ongoing regrets is that he was unable to take her "The Four Directors" class - a sore point he apparently continues to bring up in discussions with her.

Stacey Abbott and Janet Halfyard both gave astonishingly strong presentations and no, it wasn't just because they had clips! Scholarship plus enthusiasm - that's the secret! Further, the "Mr. Pointy" award for best paper given at this conference was justly awarded to Cynthea Masson who presented on the oft-misunderstood episode "The Girl in Question." It's now on my "must rewatch" list. (By the way, the "Mr. Pointy" award is one of those rare academic awards that is not a plaque. Indeed, Cynthea may have a difficult time should she unwisely attempt to put it in her carry-on luggage!)

It's been a great time - my own paper on Doyle (presented in conjunction with musicologist Janet Halfyard's wonderful paper on the Orpheus myth and how Buffy manages to be both Orpheus and Eurydice; savior and saved; hero and heroine) was very well received, although questions were scant. It was the final day - people are a bit tired by then. The "Buffy Bookers" session was lovely and (for me) wonderfully circular. Two years ago, I was in the audience puzzling over how these people managed to get published. Now I was at the front of the room, wondering just which of those eager, bright-eyed folks out there was me two years back.

The circle not only continues, children, it becomes wider.
Posted by K. Dale Koontz at 11:37 AM

I'm still in Little Rock, and I'm missing everyone from SC3. I stumbled upon your blog while looking around at Slayage material, and now I feel very happy to spend part of my evening reading your interpretations of events. I'd write to you in person, but I have no access to your e-mail address here! Thanks for your kindness and for the great conversation on the last morning at breakfast. I very much look forward to seeing you next time. C.

Mrs. Haunt and I just wanted to say how much we enjoyed getting to talk with you at greater length this time around. Three days is just not enough for things like this. Already counting the days till next conference.

By the way, I've got my review up at Whedonesque.org.