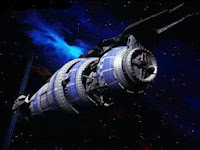 
Welcome back to Third Age Thursday ("TAT"), an ongoing feature here at Unfettered Brilliance! Along with Ensley, who's posting the wonderfully-named "Tuesdays with Mollari" over on his blog, (he's is a little behind as he took some time to help me deal with those tests Dr. Franklin insisted on me having - check the previous TAT here), these posts are written to keep you up to date on the writing and publication of Dreams Given Form: The Unofficial Companion to the Universe of Babylon 5. Please feel free to comment, re-post, tweet, plus-one, pin, and use all sorts of other ways to pass along the news that a comprehensive Babylon 5 book is in the works with publication ETA sometime in 2016. And remember that you can always search through these posts to find all the "Third Age" posts by using the search feature on the right. Just use "Babylon 5" or "Third Age" as your search term.

Babylon 5 is such a rich, deep, complex text to explore that sometimes it's hard to know where to start these posts - should I discuss an episode, a particular character, the nature of telepathy, maybe the relationship between a couple of characters . . . which way to go?

Well, today, I want to talk about an odd episode that happens late in the run of Babylon 5. The only one to be written by someone other than JMS so late in the run of Babylon 5, "Day of the Dead" (5.08) sees characters visited by dead people from their past. For years, JMS had asked/hounded/stalked Neil Gaiman to write an episode of the show, but the scheduling never quite worked out.

That JMS is a fan of Gaiman is evidenced by
Case rested on that point.

The episode itself is interesting as we see crew members face the dead, who (let's face it) nearly always carry guilt for the living, intentional or not. Season 5 gets a lot of flack - often from viewers who wanted things to end of the wham-boom-crack! of Season 4, but life goes on, and that's a lesson Season 5 of Babylon 5 teaches us.