There are certain hints that let you know you're probably in for a bad movie (there are always exceptions, of course - I'll get in to those in this same post, so hey! rule of thumb). Among those are - movie titles that include the author's name like "Bram Stoker's Dracula" (Gary Oldman's a lot of fun, but that's about it) or "Stephen King's Cat's Eye." Also avoid any movie "brought to you by Hasbro" - that lets you escape both Battleship and the current Ouija. You can see why I cringe from those fearful words 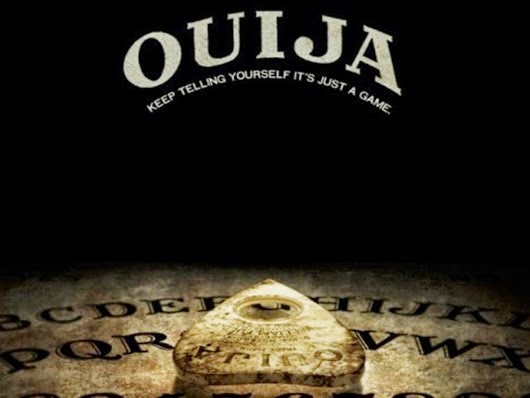 On the surface, Ouija should be great Halloween-season fun. Nearly everyone has a slightly creepy story to tell about the "spirit board" and the planchette seeming to move under its own power. Cast an group of attractive not-quite-adults and really - just sit back and watch the cashy money roll in.

Oh, Ouija is doing well enough at the box office that first time director (and many times special effects guy) Stiles White will get another shot at a low-budget scarefest. But the movie is just a checklist of "what not to do when you think you're under supernatural attack." First off, if you decided to go exploring in the (naturally) dark house - go to Lowe's. Buy a generator, a couple of hundred-foot heavy-duty drop cords and about half a dozen big work lights. Rig that house up like the Fourth of July - THEN go in. It's also crazy-making how the adults just disappear, leaving the kids to sort through a rash of teen suicides by themselves. Still, it's got some good jump scares and I admire the restraint it took to get a PG-13 rating for this sort of film.

However, one of my biggest gripes about Ouija is (I'm about to get all film scholar on you here; just bear with me for a minute) its self-reflexive post-modernity. You've got a movie here dealing with spirits, communication beyond the grave, malevolence lingering about places and objects - all the signs of a classic haunting and there's not one single mention of God. I can handle that to a point - personally, I thought the film Stigmata in which an atheist receives the marks of stigmata to be a very interesting take on that aspect. But I'd just come from watching the director's cut of The Exorcist and let me tell you - when in these confusing, frightening situation - get a Jesuit, not the Hasbro help line.

So - The Exorcist. First off, this breaks the rule of thumb, as it's actually William Peter Blatty's The Exorcist, but this is the exception that may prove the rule. Released in 1973, Warner Brothers still maintains a website for the movie. Often called "the scariest movie ever," The Exorcist has a slow pace and much of the terror comes, not simply from gross-out effects (although there are some seriously disturbing moments in this film, especially revolving around sex and religion), but from the sheer otherness that's involved. Is the little girl "just" deeply psychotic or is there actually something from another spiritual realm in there?

Ladies and gentlemen, bring out the Jesuits! Seriously. The Society of Jesus was often at the forefront of any exploration into the New World and they quickly established schools in their territories. As to exorcism and demonic possession, I hold to Hamlet's point of view that "There are more things in heaven and earth, Horatio/Than are dreamt of in your philosophy."

The unknown is scary and we rational, 21st-century beings often like to think that there are no dark corners left in the world. H. L. Mencken knew better. He wrote: "Penetrating so many secrets, we cease to believe in the unknowable. But there it sits nevertheless, calmly licking its chops."

You want to be scared? Skip Ouija and read the front page news for three days. You want to be unmanned by the terror of what might be? Watch The Exorcist.