On the "new" side of things, I went to see Laika's latest, The Boxtrolls. Sigh. It's another entry in the "meh" parade, although a very pretty one. This makes me sad, as I really, really wanted to like this movie. Laika is the studio behind Coraline (2009) and ParaNorman (2012), both of which were visually ground-breaking and told strong stories. Here, the visuals remain truly stunning, but the story isn't what it could (and should) be. It's cute and cute is fine when one is talking about kittens and babies. But for movies, I want more. The elements are there - Boxtrolls has some sophisticated jokes (especially two of the henchmen who find themselves wondering about the good guy/bad guy binary) to leaven the gross-out jokes about cheese consumption and the story has some nods towards class structures, privilege, rank, how we treat the different among us, and how quick we are to believe the worst stories we hear - but it never quite jells, which is a crying shame. A wonderfully talented voice cast (including Ben Kingsley, Nick Frost, and a tiny role for Simon Pegg) helps, but overall Boxtrolls is a rental, not a must-see. 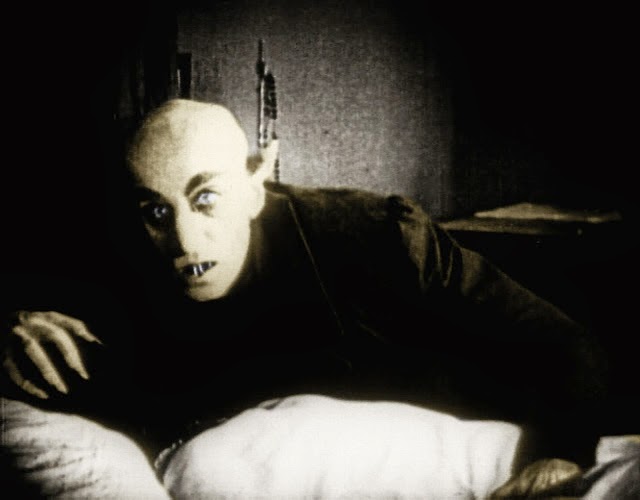 You know what is a must see? (That's a segueway for you!) The granddaddy of all vampire films, F.W. Murnau's 1922 masterpiece Nosferatu. Seriously - this is a must-see for any film buff. Despite some changes to the names of characters and setting, Nosferatu is widely considered to be the first adaptation of Stoker's Dracula. The Stoker family certainly thought it was, as they sued the bejeezus out of the production company for copyright infringement. They won the lawsuit and all copies of the film were ordered to be destroyed, but fortunately, pirated copies remained. This is the film that Lauren Bacall insisted her granddaughter watch after dragging Bacall to see Twilight. Ensley and I are leading a viewing-and-discussion of Nosferatu as part of Cleveland Community College's upcoming month-long celebration of All Things Spooky (okay, not the actual name, but you get the idea). We'll show Nosferatu in the Rose Library at 5 pm on Tuesday, October 7 with discussion to follow. Come on out and see a silent movie so terrifying that it was banned in Sweden until 1972! (Really. It was.) Hope to see you there!
Posted by Dale Guffey at 9:26 PM