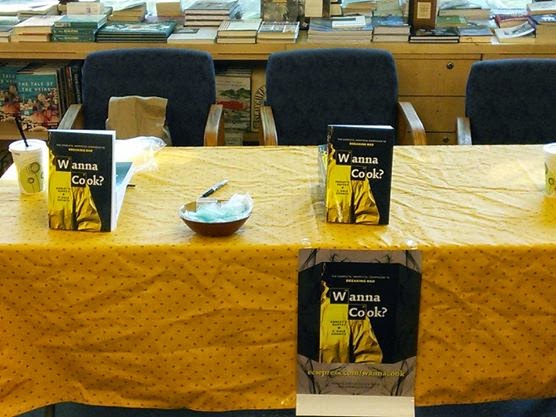 I apologize for missing "Walter White Wednesday" this week, but it was unavoidable. Ensley and I had just returned from the Sixth Biennial Slayage Conference on the Whedonverses and were dealing with jet-lag. I'm pretty sure that if I'd tried to post on Wednesday, the result would have looked like this:

And really - who wants that?  We did have a successful book signing at Beers Books in Sacramento, due in large part to supportive Slayage attendees who came out to celebrate with us (and maybe to score a little of the blue). The picture at the top of the post is from the signing - look at that enticing bowl of candy!

Many others will post about Slayage - and there will be an official report on the various papers, presentations and roundtables put out by official Whedon Studies Association ("WSA") reporters soon - so I'm taking a different tack here. Rather than attempting to summarize the various papers I was able to hear (I missed a fair number, since three sessions run concurrently and I have yet to master the use of time-traveling technology), let me explain why the WSA matters.

There are any number of professional organizations - groups devoted to particular philosophers, authors, theorists, professions, and so on. The WSA is devoted to the academic study of Joss Whedon, a prospect that has caused more than one media professional to say, "Huh-what?" I'm not here to re-plow that ground - Whedon's work often shows depth and nuance that an academic would eagerly pounce on, and the fact that humor is so tightly interwoven just makes the exploration that much - well, cooler. We're fans of the work (we spend too much time here to hate the stuff, although I went to a fantastic session defending "hated characters" at this latest gathering), which means we quote, and quip, and wear clever T-shirts. But at the core, Slayage is about scholarship. How does Dollhouse tackle themes of consent and privilege? How can theories of leadership and military tactics be applied to The Avengers? How does the law firm of Wolfram & Hart reflect actual legal principles of a "vigorous defense"? Oh, we do go on.

But even that's not the real point of this.

Perhaps you've noticed:  higher education is a mess right now. Questions of student loans, bloated administrative costs, low morale, frozen pay, a dangerously-expanding bubble of adjunct workloads, and the application of so-called "business models" to education dominate the headlines.  In short, it's not a good time to ask for funding to go to a conference devoted to a man best known for creating a show with the silly-sounding title Buffy the Vampire Slayer, no matter how elevated the work and discussion might be. But go we do, often on our own dime. And that matters.

Yes, we make valuable contacts. Publishing contacts, professional contacts, and personal contacts - we make 'em all at Slayage. We present our work - often nervously; these people are smart! - and we refine it as a result of questions and comments we receive. In such ways, scholarship - which ought to matter as much as the football field house - advances, bringing us along with it. We see the world a hair differently. We understand each other a touch better. We aren't so scared of someone who doesn't look exactly like us. 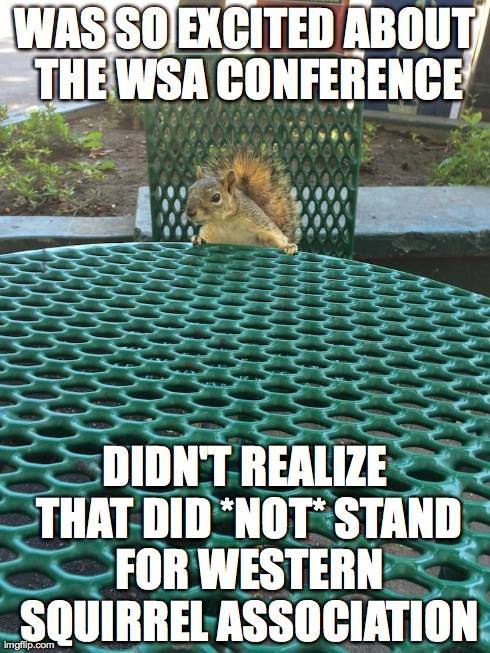 And that's what it's about. Now, the WSA won't work that way for everyone; that's why there are all those other societies. But for me, the WSA provides a unique opportunity to learn. Many teacher-types don't want to do that - they aren't secure enough to admit there are things they don't know about, so they remain tightly in their own box of expertise. Whedonians not only cheerfully admit that they don't know things; they revel in the idea that there's so much more out there to learn and they expect you to share. I've attended sessions in areas that are so far afield from my own areas of expertise that it would make my knees quake to consider going to a presentation in those areas if I didn't have the common thread of Whedon to wrap tightly around me. Seriously - I know very little about musicology or the French philosopher Gilles Deleuze and I attended - and enjoyed - sessions centering on both.

The "bottom line" folks would ask - "Well, how are you going to use that in class?" 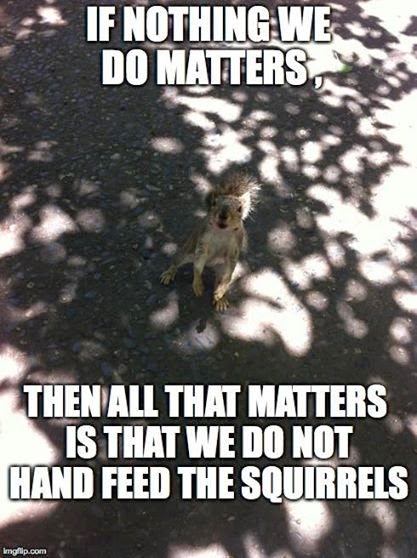 My answer:  I don't know. Yet. But I know I'm a better instructor for going outside what I already know.

And Slayage is also so much fun! Spending time with intelligent, lively people who are reveling in their passions usually is. Add to that the campus squirrels, who were entirely too tame, and you have the makings of a meme. So we did.  (Tumblr. The. Best.)

Passion.  Maybe Angel said it best:  "Passion is the source of our finest moments; the joy of love, the clarity of hatred, and the ecstasy of grief. It hurts sometimes more than we can bear. If we could live without passion, maybe we'd know some kind of peace. But we would be hollow. Empty rooms, shuttered and dank . . . without passion, we'd be truly dead."

So there's Slayage and during that time, we see each other.  We squeal, and we hug tightly, and we cement that community, knowing that it needs to carry us through another Slay-age (which has been determined to be four days followed by two years). And carry us it does. Think of it this way - since I started attending with the second Slayage in 2006, I've published my first book; gotten involved in fan communities that use Whedon's words as inspiration to raise awareness and cashy money for good causes (I even helped design a T-shirt to help with one I felt especially strongly about); met and married my husband; co-wrote a book with him; and built relationships with people that I may not see all that often, but consider family nevertheless.

I can't put a dollar amount on it, but I know it's worth something better than cash.
Posted by Dale Guffey at 1:53 PM