Breaking Bad doesn't usually do cliffhanger episodes, but the latest episode, "To'hajiilee" ended on a wooly-doozer.  As the final episodes come hurtling down the pike, it becomes more and more obvious that things will not end well - and not just for Walt.  There will be spoilers in this post, so please take that into consideration if you decide to read on.

First, my co-author, Ensley, has written brilliantly about this episode over at his blog and I suggest you check that out.  One of the best aspects of co-writing is the fact that we see different things when we watch and I think having the two perspectives makes for a stronger book - and Wanna Cook? The Complete, Unofficial Companion to Breaking Bad is coming along nicely.  We're really in the final 30-day push here, although there will be some loose ends to tie up (in a far less bloody fashion than Walt would probably employ) after the manuscript draft is submitted for these final eight episodes.  (OK - spoilers after the jump.)

We know that Jesse has been an avid student of Walt's (well, at least in the meth-making field; his high school chemistry work was apparently subpar) since the two first teamed up back in Season 1.  Turns out that Jesse wasn't just learning chemistry.  Having decided to turn sharply against Walt after discovering Walt's role in Brock's poisoning, Jesse is playing for keeps.  Back in "Rabid Dog," Jesse howled, "He can't keep getting away with it!" but later, having regained a sense of calm (and having come down from whatever chemical cocktail was dusted on that disc on the dashboard), he is resolved to hit Walt "where he really lives."

Interestingly, that's not Walt's family.  Jesse's not interested in going after Skyler, or Junior, or (God forbid) baby Holly.  No, Walt's the one who will stoop to injuring children.  Jesse knows that, despite all Walt's pious posturing about doing everything for the family, what truly matters to Walt is buried in seven barrels in the desert of the To'hajiilee Navajo Reservation.

Walt, who I have argued is the true "rabid dog," has loosed Todd's neo-Nazi Uncle Jack and crew on Jesse and Walt discovers that some things can't be taken back.  Make no mistake - this is Walt's doing and it's his fault.  Sure, yeah, he didn't mean for anything bad to happen.  That and a buck will get you a cup of diner coffee.  He set these wheels in motion and he's going to have to live with that.  And we know he lives (previous episodes have indicated that, going back to "Live Free or Die"), but I seriously doubt that goes for everyone else out in the Place with No Memory.

By the way - just yesterday, we got word that we could release the cover photo for Wanna Cook?  We're thrilled with the work ECW has been doing on behalf of the book so, to paraphrase Shelley (and Walt) "Look on our works, ye Mighty, and pre-order!"  (You can do that here!) 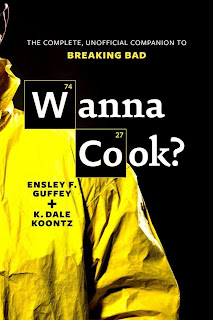