To be fair, I'm not the audience Breaking Dawn is intended to reach.  I read the first book about the time Twilight came out as a movie - I was teaching high schoolers at the time and I believed (and still do, mostly) that anything that gets that many people reading has to have some merit.  Alas, I think the only reason I finished reading Twilight was due to some sort of grim, morbid curiosity.  It had to get better, right?  You just couldn't put that many God-awful cliches into one novel - and you're telling me this claptrap spreads over another three books?

And don't get me started on the 50 Shades phenomenon - which began life as Twilight fanfic.

Look - I have problems with the whole Twilight franchise and I can explain them easily enough.  Bella is a throwback character who has little agency of her own.  She's clumsy, passive, always needs saving, and is never complete without a man.  The "bad boy" can only be understood by Bella, whose soul was made to be with his.  Being dumped is a reason to abandon those who love you and hurting yourself is a sensible course of action, for it will bring your One True Love back to you.  Lie to your parents and - oh yeah - violence is okay, because it's a mark of uncontrollable passion.  Sex, even within the bounds of marriage, is dangerous and will kill you, but that's okay, because you were born to be different and you can only achieve that transformation by subsuming all that you are or could be into another's desires.

But I'm game, so off to Breaking Dawn I went.  It's not awful, but it is a fairly unimaginative, shopworn teen romance.  All the sharp edges of being a vampire are ignored - she's with her True Love; they have an adorable, problem-free child; they're rich beyond imagining; they're surrounded by those who love and understand them; they're faster and stronger than humans, and gorgeous to boot (albeit it a touch pale with oddly red-tinted eyes).  Really, what's not to like?  I far prefer the deeper, more troubled, approach Buffy gives to this sort of supernatural romance. 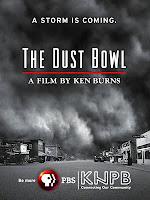 On the other hand, if you want stories of tough people enduring tough times, run - do not walk - to see Ken Burns' two-part series The Dust Bowl.  How soon we forget.  The largest man-made ecological disaster in American history happened not a hundred years ago.  Millions of acres of virgin grassland prairie ripped up to plant wheat, which was great - at first.  A bumper crop, coupled with the Great Depression, meant prices fell, so farmers plowed up more land, removing the very root system that held the rich topsoil in place.  Then came drought.  And tons of topsoil blew away.  Watch the footage of those dust storms rolling in - I expected to see orcs emerge from the blackness.  Magnificent stories, well told.

All without sparkly vampires.
Posted by Dale Guffey at 7:21 PM