Changes and a Triumph of Felt! 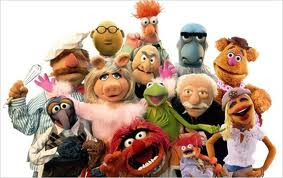 I'm going to be making a few changes here over the holidays - already you'll notice that, over on the right, I've added a "Follow Me on Twitter" button.  Yes, I'm there, too and I'd love to have you tag along on that journey.    I'm going to be adding a "Now Playing" link as well that will link to whatever movie or TV series I think is worth spotlighting at that particular time.  Sometimes it'll be a new release, sometimes it'll be an older gem that I've just discovered (or maybe re-discovered) . . . anyway, it'll always be something that I think is well worth your time.  Check back for it a little later, but I have to say, I bet the first one will be . . .

And I'm not alone in giving this one high praise - Rotten Tomatoes gives it a nigh-unprecedented 97% favorable rating (which is a percentage point higher than the artsy-gonna-sweep-the-Oscars flick The Artist). Mind you, critical reviews, whether from trained "they pay me to do this" critics or "I'm here for the popcorn" consumers, should never be viewed as the end all-be all of criticism, but when a veritable slew of critics and consumers share the similar opinions, it's worth looking at.  In the interest of full disclosure, I should say that I'm a fan of the felt from Way Back.  In fact, I'm probably exactly who some of the lovingly-composed shots are aimed at - I grew up with these guys.  I learned to count with the Count on Sesame Street (and how to share - mostly.  I have my Oscar the Grouch days, as do we all).  But I was at the age that, when I "grew up" too much for Sesame Street (bye, Grover!) there was a theatre full of felt creations waiting to entertain me.

There is a very nicely done critical book on the Muppets - Kermit Culture, you can buy it here - and I am fortunate to know the editors.  You don't have to take it with you to the theatre, but really - in the midst of dreck about sparkly vampires and Adam Sandler in drag still not being funny, go see this movie.  You'll laugh, you'll cry, you'll want a Kermit the Frog watch.
Posted by K. Dale Koontz at 8:43 AM