"Love Keeps Her in the Air" 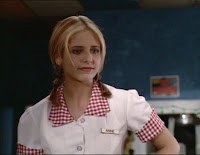 It's a double shot of Whedon this week! And it's also a double shot of Slayers as the Re-Watch rumbles into Season 3 and we see a Slayer-less Sunnydale that suddenly finds itself with an unexpected surfeit of Slayers. Over in the film class, we follow up our dip into anime by taking a swim in Serenity. Fortunately, violence did not ensue.
Reel One: Over at the Re-Watch, Buffy follows up the events of "Becoming" by following the advice of Brave Sir Robin of Monty Python fame and running away. Cynthia Burkhead explains the first three episodes of Season 3 for us, which gives her a lot of ground to cover, as Buffy tries to re-invent herself in the glittering sewer that is Los Angeles (that's her at the top of the post in her "Anne the Waitress" persona), returns home to discover how much home has changed (or maybe the changes are in her) and how much her absence has affected people she loves, and a new Slayer comes to town. Burkhead approaches these three episodes through the lens of examining Buffy's dreams, which can be prophetic for the Slayer but also very instructive for the audience.
Reel Two: Ah, Serenity. My introduction to the 'Verse of Firefly, as I (hangs head, adopts defensive tone) missed the "blink and you'll miss it" half-season when it first aired on the Network That Shall Not Be Named. So this is how I met Mal (who I only knew as Caleb from much, much later on Buffy. I'll let the Re-Watch handle him in due time) and his quirky crew. The class seemed to enjoy the film - those River fight sequences are jaw-dropping - but I'm not sure the True Grit-meets-Mandarin-Chinese dialogue scored points. Still - a fitting bookend for the world of Bebop.
Coming Next Week: Guest speaker! Dr. Sherry Ginn, neuropsychologist, author, and national science fiction section chair comes to talk to the class about sex, gender, and space. All kinds of space.
See you there!
Posted by K. Dale Koontz at 7:32 AM