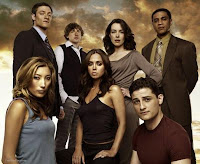 Dollhouse airs its final episode next week. This is a one-week delay, as the episode was pushed back a week due to the charity concert to raise desperately-needed funds for the Haitian earthquake relief effort, which aired last night. Far be it from me to complain about a television show being re-scheduled due to such a worthy cause, but I find it terribly interesting that the concert, which is a nigh-unprecedented coming together of people and technology, should so scramble the plans to broadcast the final episode of a show which takes as one of its main themes the potential for technology to wreck human lives.

I'm caught up on my viewing and note-taking and I have to say: Hmmm. Plenty of good going on and twists and flips worthy of an Olympic platform-diving competition, but I'm still not totally sold. Which is a shame, since I wanted to buy.

The show's connection to the play R.U.R. has been acknowledged in a quick little meta-nod and I'm glad I found that connection beforehand (see earlier posts from the fall of 2009). Further, I'm looking forward to writing in more detail about the connections and inverses (inverci?) between the original source material and what Whedon has done with it.

I very much enjoyed playing detective with some of the literary references - Melville's adage of the horrible body count of "From hell's dark heart, I stab at thee" is evident in "Getting Closer" (then again, Star Trek 2 as well as The Simpsons have referenced that one) and Whedon twists Eliot around so Rossum certainly ends with a bang, not a whimper in "Hollow Man" - but I still think it's just too little, too late. The show wanted to wrestle with some of the Big Questions such as the role of memory in creating identity, human trafficking (I so wanted an episode in which a Doll rescued modern-day slaves and then toddled back to the House for a "treatment," which I think would have pointed up that particular theme, but maybe it would have been heavy-handed. Now I'll probably never know.), the use and misuse of technology, pure science vs. weaponized ideas (Topher as Robert Oppenheimer, the mastermind scientist behind the Manhattan Project who upon seeing the results of the Trinity test, referenced himself as Vishnu in a very blood-chilling way), and many more besides. I suspect the problem lies in Whedon not really knowing how to create a balanced meal from such a buffet. Too many refined carbs and too much chicken-fried steak; not enough veggie medley. And don't get me started on the dessert section! "Epitaph One" lingers over the final episodes; something I warned about way back when as it seems to box in where you can go.

Let's see what the final episode brings us and yes, I'll miss Dollhouse when it's gone. But I think it's time to move on to another project. And some breakout stars have been added to the Whedon family, Enver Gjokaj (Victor/Anthony/occasionally Topher) chief among them.
Posted by K. Dale Koontz at 8:25 AM